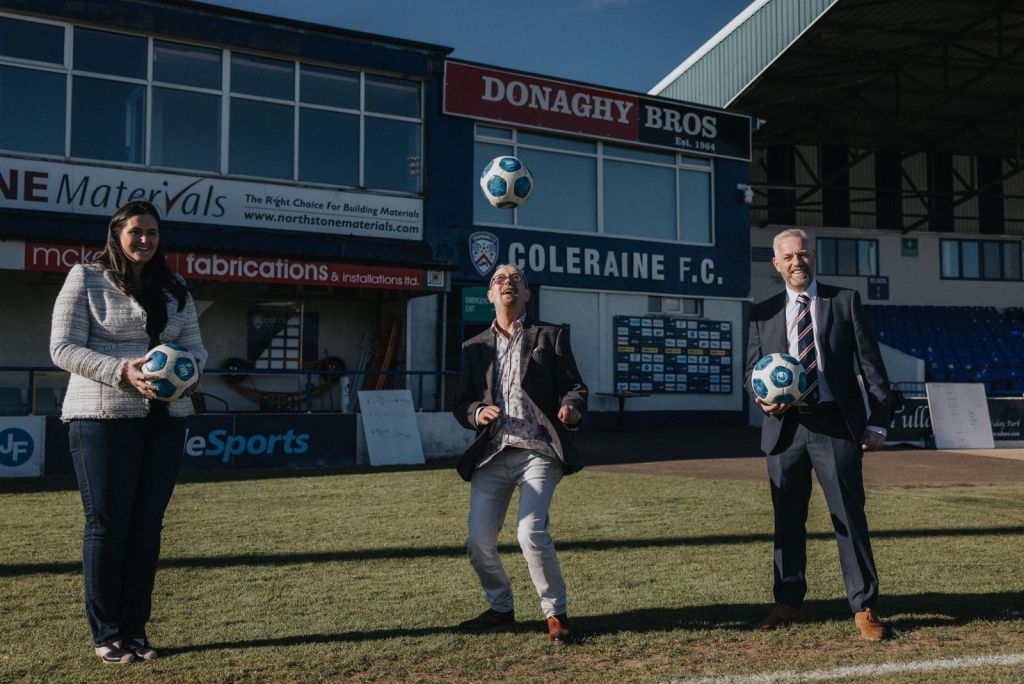 The Hummingbird Project, located in Portstewart on the stunning Causeway Coast in Northern Ireland, recently announced a new partnership with Coleraine Football Club which will see the Bannsiders support the award winning local social enterprise by promoting its mental health and resilience work with football fans and the local community.

The announcement comes at a time when Coleraine Football Club are riding high in second place in the Irish League table with every chance of securing an all-important European place for finishing second. But it’s not all over yet; there’s still an outside chance the Bannsiders could lift this year’s title.

Regardless of the outcome, CFC are on target to secure a coveted second place for the second successive year with credit going to manager Oran Kearney; the back room staff; and the players for continuing to bring success to The Showgrounds, despite a global pandemic.

In this podcast, Damian Mullan from the Coleraine Chronicle/Alpha News Paper Group and a voluntary member of the media team at Coleraine Football Club speaks to Jimmy McAleese Service Development Lead at Hummingbird.

They discuss what the project means for the club, the fans, the community and the importance of getting men to talk more openly about issues affecting their mental health.

Jimmy (an ardent Coleraine fan) like every other Hummingbird Project staff member, is a trained mental health expert with ‘lived experience’ of mental ill health and trauma. The team at Hummingbird use a unique combination of professional expertise and personal experience to ‘make good change happen in people’s lives at individual, organisational and community levels.’ This is what sets The Hummingbird Project apart.

Following are some of the in-conversation highlights.

Jimmy: Since joining Hummingbird, I’ve always wanted to do something with the club as we are a growing community organisation. What better way to do that than in partnership with a club that is really going places?

Damian: The CFC Chairman, Colin McKendry is very keen to improve interaction with the community. There are plans to install a new pitch, improve the facilities. It’s all about widening community participation and bringing people along.

Jimmy: Yes, and we have no pre-ordained set of ideas about how this will work. We are coming at this from the point of view of getting people involved at every level from the fan base to management to address the growing need for emotional health support particularly with Covid and the extra pressures brought about by the Pandemic. With the effect it has had on people’s mental health there are fears there is going to be a real surge in cases.

The timing couldn’t be better. At Hummingbird, we recently celebrated our fifth birthday so the timing is absolutely perfect for a partnership like this. We are not a typical mental health organisation. We are a little bit quirky, a social enterprise and very innovative in what we do. We are always looking for a different way of doing things like co-designing our projects with the people we are going to work with.

In my mind our future partnership is going to involve working with everyone in the club from the Chairman to the fans in the planning of what we are going to do and we look forward to taking that forward very soon.

MENTAL HEALTH AND RESILIENCE IN SPORT:

Jimmy: I’ve had a great deal of joy recently during the streaming of CFC games when there’s been a last-minute goal against the team; this has happened a number of times but then you see the lads shoulders lift up and the heads go up. That’s resilience. That’s being mentally well prepared to be on the pitch.

CFC is fortunate having a manager and a backroom support team in the club who have our lads so well drilled from a mental as well as a physical point of view. It’s not the first time we’ve seen this, this season. We’ve lost very few games. The manager, backroom staff and players deserve a lot of credit. The players at the back are playing a blinder.

Through our new partnership we hope to help as many people as possible to have their own approach to an ability to determine their own mental health and emotional needs, to seek help early and build their resilience skills because that’s what keeps you going.

The earlier you ask for help and reach out the better because you are tackling a much smaller problem then than down the line when things have started to disintegrate. We are very much into prevention work which we do one-to-one with people but the real magic for me is when you have a group of people in the room. Hopefully with the lifting of restrictions, we will get back to that soon.

When you get groups of people within the community and work with them on emotional resilience and good mental health, it’s a privilege to be honest. Before I had a different career and I find it an absolute privilege to watch people grow and change and become more positive and pick themselves up again.

It’s not the Hummingbird’s role to tell people how to do that. Everyone is their own expert and everyone knows what will work for them. It’s about trying different things and looking after yourself from a selfcare point of view.

Jimmy: “Us men need to talk a lot more than we currently do. When I walk into a match (hopefully sometime soon) someone will say how are you doing? And I’ll probably say, I’m fine and they’ll say they are fine but we don’t talk really about the things that are important in your life that you are emotional about and we need to get a lot more of that being spoken about.

Men say it is typically fine but it’s often not. Large numbers of fans at these football clubs are male. If one person can do it; there is every likelihood their mates will do it. It’s little blocks like that that, that make this type of partnership worthwhile.

I think more and more of that will come. We are at the point in the partnership where we want to share ideas with each other, but ideas that will have an impact and we can measure that impact. It has to be practical. It has to be measurable and have real outcomes.

It’s about reaching out to people and trying to engage with them and get them involved and take time to get things rights. We don’t want to rush it. We have to ask ourselves what is this partnership? It’s not written down on a sheet of paper. We want to start generating ideas and formulating plans. I don’t see this as a short-term thing.

Damian: This is something other clubs are going to start taking a look at. I think Swansea City is working along with a group called Beyond the White Lines. Coleraine is taking its first steps. It’s something that other clubs now could be looking at because mental ill health is such a problem, clubs could really help in their local communities.

Jimmy: At Hummingbird we have a number of local partnerships that have been built up over the years that reach out to all our communities around the club. This trend we will see growing in the world of sport. For me it was always going to be football first and it’s my dream now to be working with Coleraine. On the pitch it’s really going places. It has been a tremendous season for the club. It’s not long now until we lift the trophy and I hope I’m there.

GETTING THE SPECTATORS BACK

Damian: In terms of mental health for fans; one thing that could help everybody’s mental health is getting spectators back in the coming days. Jimmy, I think you mentioned earlier that thing about being able to hug strangers when a goal is scored. We’ve all been there at sports events, whether it’s rugby, football or Gaelic but there is nothing in terms of mental well-being to be able to celebrate as fans, as a group of people, as a community. The sooner it comes back the better?

Jimmy: I miss those day trips away when we outnumber and out-sing the opposition and I miss my days at the Showground when it is packed to capacity. I want to see the place jumping. I think we have a huge opportunity to grow our support and continue our success.

The club has been playing a blinder during the Pandemic keeping in touch with the fan base through social media, podcasts and high-quality streaming. The club has also been doing great things in the background helping people individually, those who have been struggling with their own mental health.

Just little gestures that come through the club. They should be very proud of what they are doing in the community.

We ain’t seen anything yet.

We use cookies on our website to give you the most relevant experience by remembering your preferences and repeat visits. By clicking “Accept”, you consent to the use of ALL the cookies.
Do not sell my personal information.
Cookie settingsACCEPT
Manage consent

This website uses cookies to improve your experience while you navigate through the website. Out of these, the cookies that are categorized as necessary are stored on your browser as they are essential for the working of basic functionalities of the website. We also use third-party cookies that help us analyze and understand how you use this website. These cookies will be stored in your browser only with your consent. You also have the option to opt-out of these cookies. But opting out of some of these cookies may affect your browsing experience.
Necessary Always Enabled

Performance cookies are used to understand and analyze the key performance indexes of the website which helps in delivering a better user experience for the visitors.

Analytical cookies are used to understand how visitors interact with the website. These cookies help provide information on metrics the number of visitors, bounce rate, traffic source, etc.

Advertisement cookies are used to provide visitors with relevant ads and marketing campaigns. These cookies track visitors across websites and collect information to provide customized ads.

Other uncategorized cookies are those that are being analyzed and have not been classified into a category as yet.

SAVE & ACCEPT
Scroll Up
DONATE!